I posted this on Sailnet as I used some of the forums to help prepare for the move.  In interest in not re-writing everything here, I'm just re-posting.  The big update is that Atlas is back in the water, but now it is FRESH Water.  Lake Superior.  She is at a dock at the upper harbour in Marquette, might move to Ashland, but I'll keep you updated.  Here is the update on the move…. 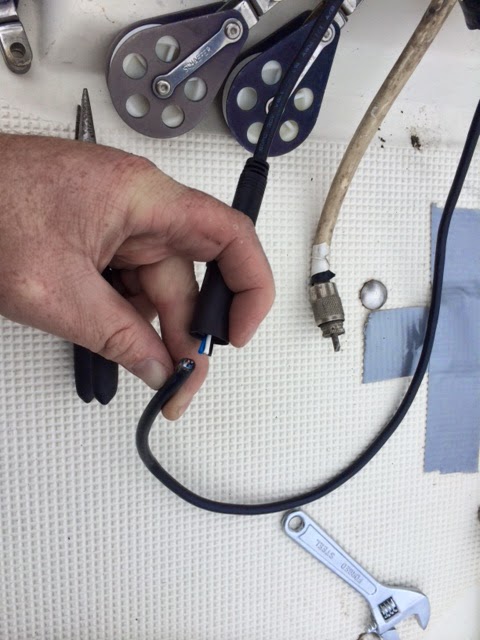 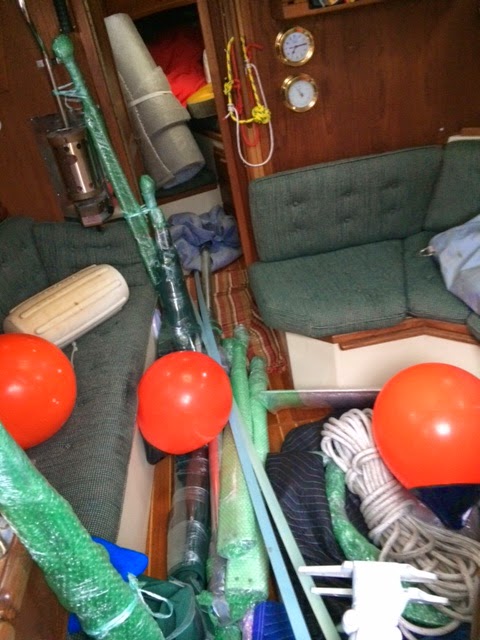 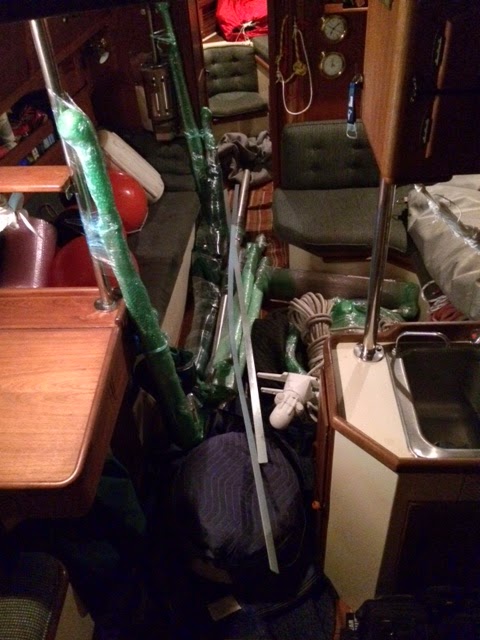 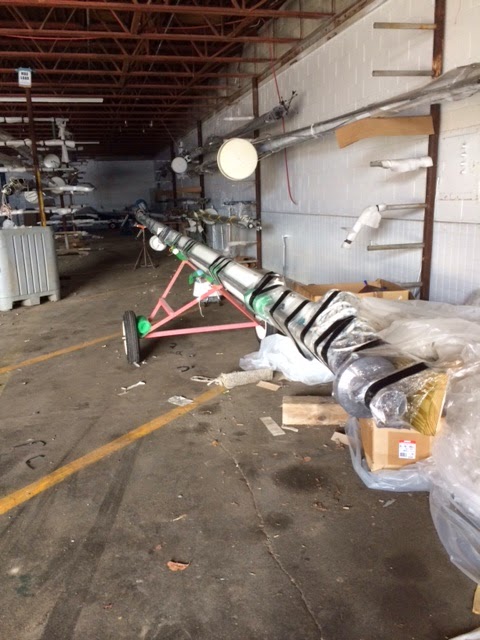 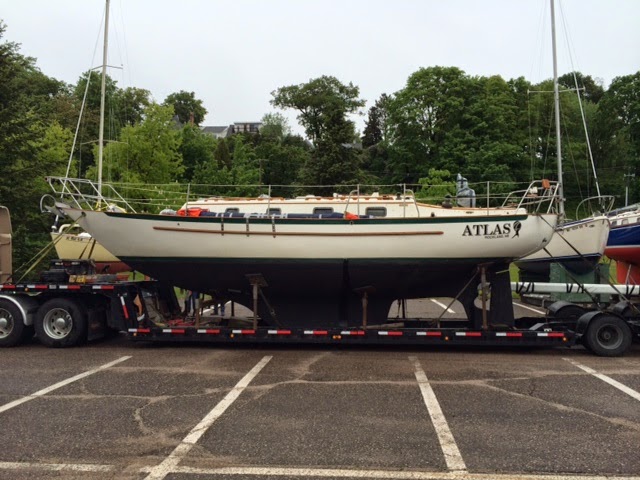 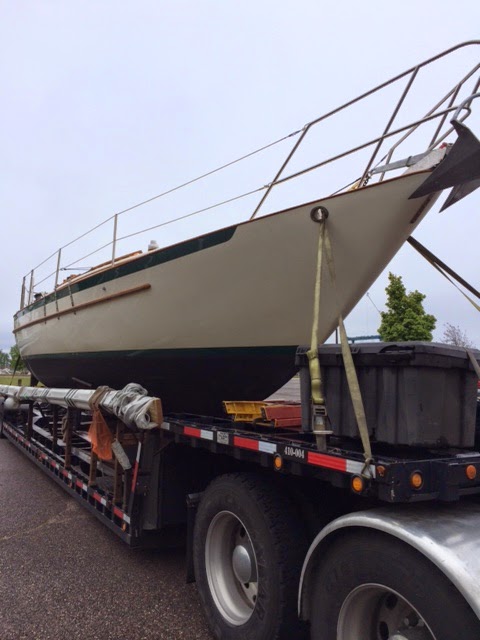 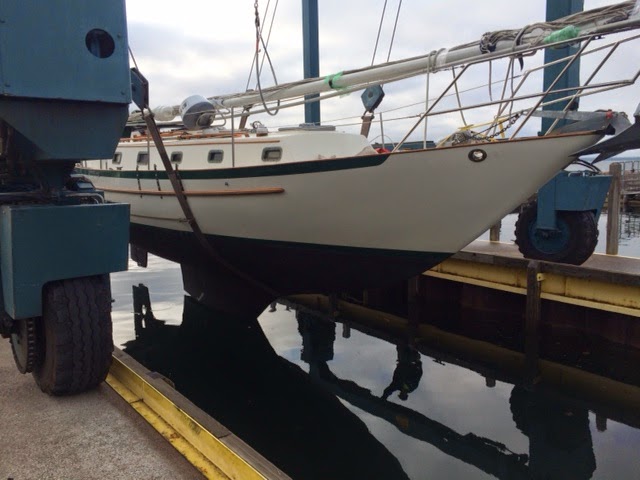 Not much of a sailing video, but here is a video from diving in Cozumel in April of 2014.  I just found out I will have a slip at the Presque Isle Marina (Upper harbour by the active ore dock) in Marquette Mi this summer.  It is a 42 foot slip, and I'm happy to have a home for the boat.  Now to get it transported from Maine to Michigan...  I also will be starting a new job in Wisconsin, but it is only 2 hours from Marquette.

A video of some of the year's adventures:
Posted by SVAtlas at 18:16 No comments:


Not too much sailing this weekend.  There was fog everyday until mid-afternoon, and some rain. I was going to leave on sunday, but stuck around to get a few boat projects done.  That night a storm rolled in from the east, sending 3 foot rollers into the marina.  No fun to sleep in...  See the video, this was better than it was during the night.

Another couple of good weekends of sailing.  The first weekend I overnighted at the White Islands again.  This was the site of a previous anchoring saga, but I learned from previous experiences and my new mantus mega anchor held solid.  It looks like a huge oversize chunk of iron on my bow, but it has not moved an inch in the 6-7 times I've anchored with it.  See the pictures below.  I also like the fact that the mantus can be taken apart.  I'm thinking about buying a smaller one for a stern anchor that can be stored.

After the White islands I went south and east, then north to ultimately sail around the islands.

I also put up the spinnaker one day.  It was a light wind day, and I had some trouble with the setup.  The snuffer line was tangled the first time I hoisted it, but after a quick straightening everything worked out fine and I was able to make 3-4 knots in 6-8 knots of wind.  I think I would like one of the top down furlers.  It seems easier than the snuffer, but I think it would also take a pole or extension on the bow. With the big anchor up front, I'm worried about the tack gettign tangled in the hoop around the anchor. 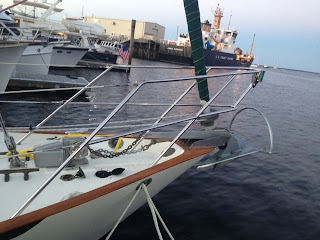 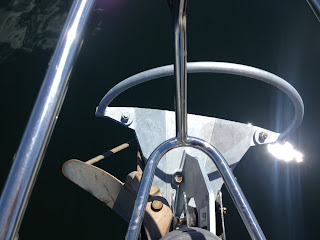 I made it out two weekends ago and overnighted in Home Harbor.  It is a little place off the islands to the south of Rockland.  It is a rolly anchorage as it is only protected on 3 sides and some waves make there way in.  It is a pretty spot, with a few houses on the islands around.  I made a few loops to check out the anchorage when I came in to look for low spots or boulders.  It looked OK on the depth sounder, but when I woke up in the AM the low tide was showing a few rocks about 15 feet off my stern.  My new anchor held fine.  The fog came in and I could only see about 30 feet for most of the morning, so I waited until the fog lifter at about noon to head back to port.  It was a nice outing.


The following weekend my parents came to Rockland.  It was lobster fest so we had some nice meals and sailed over to Northhaven.  It was  a great day and the wind was perfect to have the parents on the boat.  (Not too wild, but not too slow)

Cruising and the 4th of July

It has been a while since I posted, but I've been out on the boat a few times and have been working through the bugs.  Lots of work on the auto pilot and electronics, and there are still a few bugs.  There is always work on a boat...

A few pics from the cruising and some comments.  My first overnight was to Pulpit Harbour.  It was a great harbour, and I grabbed a mooring for the night.  A neighbour came over on his dinghy to say hi.  He was on a very pretty PSC34 named Cookie.  It was a nice night, and the following week I stayed there again after having some autopilot problems halfway through a planned cruise to another island.


My friend Eliza came to the US for the week around the 4th of July.  We spent a night in Montreal when she flew in, and then headed to Maine to spend a week on the boat.  Turns out she is a good galley wench (sp?)

We spent the first night on the boat at the marina, and had a nice lobster dinner in town.  The next day we sailed to Catine and went for a walk in the town.  We put the boat at the city dock and walked into town, about a block in we found the Tap Room.  Mmmm  beer!  The town was nice and had a lot of historical landmarks with some pretty funny signs.  The signs would explain what happened when, then have some odd info at the end like "This person was burned here, after being compelled to eat his nose"

From Castine we anchored out in Holbrook Cove, just next to Castine.  The new windlass worked great.  The first anchor set was on rock, but the second was good mud.  A tall ship anchored next to us, and was a pretty sight.

From Castine and Holbrook we sailed around the Penobscot river entrance, over to Belfast to check out the harbour there.  We sailed into Belfast and sailed out. I made Eliza do about 4 tacks with about 3-4 minutes between them.  It was good fun.  We anchored that night (the 4th of July) in Searsport.  This is a very open anchorage, and there was some wind, but the bottom was very muddy and good holding.  We watched the fireworks, had another nice dinner, and did our best to kill a bottle of Bundaberg Rum.  The next day we slept in, and were a little slow getting up.  But we did go for a mid-morning swim before pulling the anchor.  It was refreshing, and we used the cockpit shower with the hot water to wash off.  It worked good, and was the first time I had used it.

The next day we sailed all the way from Searsport to the islands near Vinalhaven and anchored in a narrow anchorage next to the White Islands.  The first attempt at dropping the hook didn't hold and I pulled up a garden of kelp.  The guide book encouraged a bow and stern anchor so we dropped the main hook close to shore and the stern hook close to the rocks behind us.  This was just begging for trouble, but it was a pretty anchorage...

So middle of the night, the second anchor starts dragging.  A nice pendulum swing and we are headed towards shore.  I was watching it and caught it well in time, but what happened next was almost comical if it wasn't 1AM.  I started the motor and pulled up the tail anchor.  As soon as I put the boat in gear, I heard a sickening swish and then thump thump thump of the dinghy painter getting pulled into the prop.  (I usually keep a very short leash to avoid this, but had forgotten my trip to set the anchor earlier in the dinghy...)  So, there we are, drifting to shore with a rope  around the prop.  About this time Eliza woke up, I had her grab the rope knife (Hook knife on a stick) and I jumped into the dinghy and cut the line.  We motored the boat and set the hook and everything worked out, but the next morning I had to go for a very cold swim (we were now on the edge of the Atlantic and far away from the river) to cut the rope.  It worked out and we headed home, after a great 4 day trip.